Today in Photography 101 the theme for my photo is water. To me this scene is peaceful to look at and to listen too. This is Black Brook, the short river that runs near my house. This little river empties into the Merrimack River, which at one time, housed the mills that made up the textile capital of the world a century ago.

Posted on November 5, 2014 in Photography

The temperature was 21 degrees Fahrenheit. With the 10-20 MPH winds, the wind chill made the temperature feel like 4 degrees Fahrenheit. The snow was almost up to my knees, and even higher when I broke through the various levels of crust and ice beneath the fresh powder. Thankfully the sun was shining but the forest canopy filtered most of the rays from reaching the snow on the ground. Regardless, I wanted to walk along Black Brook in Winter. Walking in an around the many hemlock trees there was much less snow, but there was a lot more ice under the snow.  There were bowl-shaped areas among the trees as most of these trees are where the deer bed down in numbers.

Mostly I just wanted to see the water flowing beneath, around, and sometimes over the ice. I wanted to listen to nothing but the sounds of the wind and the water. And that was all I heard, other than any noise I created, which I tried to minimize. I ventured as close to the edge as I dared and sometimes that took me out onto an ice shelf that was a foot thick and only attached to a larger patch of ice that resulted from water that had gathered and frozen in the bowls that deer had created near the water’s edge. Walking was quite difficult in some areas, but that was expected. The silence was fantastic and the views were wonderful. I brought my camera on purpose and hoped to catch some of the beauty of this little stretch of land along our property.

Forecasters are calling for 6-8 inches of new snow tomorrow and these pictures will be completely redefined, just 24 hours from now. Maybe I will venture down the wooded hill to the water’s edge again, and see just how much change took place. For now, enjoy, as I did. 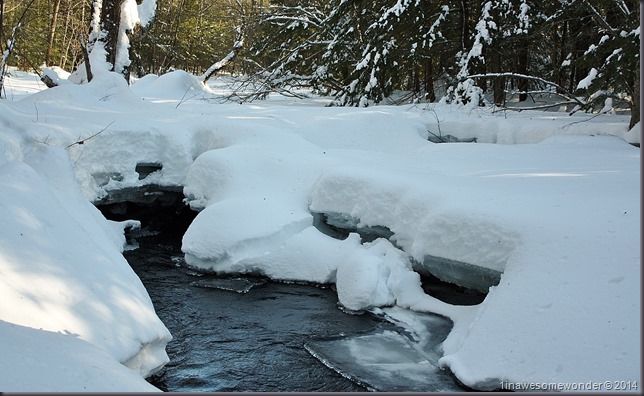