Since the last write-up I posted regarding the 2000 NH Avalanche Bantam Major Elite quite a few things have happened. Christmas and New Year’s have come and gone. High School hockey seasons have started. Kyle Greer has joined the roster and his offensive skills have been noticed. Today I will try to recap a few things here and get set for the remainder of the season.

The last game I reported here on this site was a one-sided loss to Assabet Valley played on December 7th. High School teams had just been selected and players making their school teams were still trying to figure out a few things. Among other things, these players and their families had to figure out the balance between school, sleep, homework, early morning rides versus work schedules, the new needs for school colored equipment, the school’s schedule for ice time, how many days per week, etc. That was last year, literally.

On December 14th the Avs hosted the Boch Blazers for a late afternoon game. The Avs, missing many of their players, played hard, and were competitive despite losing 4-0. The Avs could not click quite enough to generate sustained offensive pressure or to cash in on the chances they did have. The effort was solid despite having a short bench and taking 7 penalties in the game.

On December 21st, the Avs showed up at the Ice Den in Hooksett, NH for a home game that was never played, as the visiting Patriots from Assabet Valley did not show up. The Avs took advantage of the ice time by playing a 3-on-3, full sheet of ice, 45 minute game against themselves. The Avs did win that night.

Fast forward through the Holidays, a New Year started, dozens of high school practices, figuring out the schedules, who was playing where, and how much, and finally when can players make it to Bantam games, or not.

The Avs started 2015 with a road game in East Boston, Mass. on a Sunday morning. The overnight led to Sunday morning and all were greeted with a few inches of wet snow, some sleet, freezing rain, and rain, depending on what zip code you may have been in. 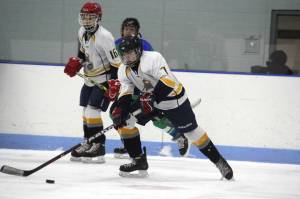 The players made it to Porrazzo Rink and battled the Advantage Ice on the ice sheet. The Avs played well throughout the game. Actually, they even carried the play for segments of the game. Even so, the Avs fell behind in the middle period, allowing a pair of power play goals to the home team. After two periods the Avs trailed on the scoreboard, 4-1. The lone goal had been scored by newcomer Kyle Greer, assisted by Cody Sullivan and Clay Sanders. In the third period, the Avs scored twice, but the comeback came up short as they lost 5-3. Third period goals were scored by Max Lajeunesse and Cody Sullivan. The first goal was scored by Max on an assist from Sebastian Beal. 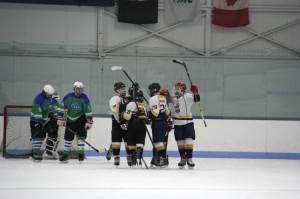 Then, Sullivan’s goal was set up by Caiden Paradise and Kyle Greer. The Avs may have lost the game, but the effort was good, the officiating was questionable which reflected on the score sheet, as the home team was whistled for just one penalty after the first seven penalties had been called on the visitors. The game also marked the first time that ‘the team’ had really played together since the Turkey Tournament at Thanksgiving.

Next, Sunday the 11th witnessed the Avs first home game of 2015. The Avs welcomed a familiar foe in the Assabet Valley Patriots. Five weeks ago, this same Patriot roster beat the Avs 10-1 down at their barn. Sunday, the 11th, today, it was a different story. I mean, a completely different story. Less than two minutes into the game, the visitors scored first, and the Avs found themselves trailing before all lines had even played a shift. Over the next 43:46, however, the Patriots would not score again. The Avs answered the Assabet Valley goal with a goal of their own less than three-and-a-half minutes later. Mike Perry scored the goal on a nice redirection from in front of the net. He tipped a well placed shot along the ice from Sydney Herrington, up, and over the goaltender’s shoulder, and in to the back of the net. Herrington’s shot had been set up by a pass from Sebastian Beal at the point. The period would end with the score tied 1-1 and the effort from both clubs about the same as well.

In the second period the Avs seemed to play their way into even more chemistry between their lines as they were all together again for the second weekend in a row. Sydney Herrington gave the Avs a 2-1 lead as she raced across the slot and ripped a wrist shot into the back of the net. The goal came off of a nice feed from Max Lajeunesse who had been sprung up the left wing boards by a nice outlet pass from his own defensive end by Caiden Paradise. After two periods the Avs maintained a 2-1 advantage and were getting the better of the chances.

The third period saw Kyle Greer score a goal on perfectly placed shot just inside the post, and under the crossbar. Greer took a well timed pass from Lajeunesse and made no mistake. Cody Sullivan had started the play with a nice feed to get Max flying up the right wing before delivering the pass to Greer. Herrington had another great chance for the Avs from the slot but the goaltender got a piece of the shot and the puck rose high enough to glance off of the crossbar and over the net. The Avs would finish out the effort with teamwork apparent at both ends of the ice, and hold on to a 3-1 win. Spencer Burgess and Gavin Cram were both solid in net and each made key saves in the victory. Clay Sanders, Christian Levesque, Tyler Whiting, and Jonathon Last all contributed to the victory, getting chances to score or creating the chances, while shutting down the opponent.

The NH Avalanche 2000 team will be back on the ice for their next game on Sunday morning, January 18th at 10:45am versus the Seacoast Spartans. The game will be played at Thomas F. Sullivan Arena on the campus of Saint Anselm College. See you then. Thank you for stopping by.