END_OF_DOCUMENT_TOKEN_TO_BE_REPLACED

It’s Tournament Time, and the Grizzlies have advanced to the NHIAA Division II Ice Hockey Quarter-Finals! The Grizzlies travel to West Side Arena in Manchester, NH to take on the #2 seed, Merrimack Tomahawks. The puck drops at 4pm tomorrow, Saturday, March 12th at West Side Arena. For you Grizzlies’ fans, come out and support your #7 seed, Goffstown Grizzlies.

Before I get into this brief preview, full of stats and numbers that often times don’t matter once the puck drops, I have one other thing that does matter, and I have wanted to cover this for quite some time. Recently, a video has made its way around cyberspace providing perfect segway to get this teaching moment off of my chest.

I have discussed this with my kids long before this video came around, but I encourage any parent or coach to share this with their kids or their players, early, and often if needed. This is about honor and respect. It’s about our flag, our anthem, our country. My kids will tell you that my favorite song is our National Anthem (it’s true). So, I share this video. Just click on the link and take the 4+ minutes required to watch it. Share it and make sure this generation understands what it all stands for. It drives me crazy when I see players, coaches, or anyone else who can’t stand up straight and quit being a distraction or being distracted long enough to honor our country. Again, this isn’t about views or sides, but about honor and respect; two things that this world could use a lot more of. Thanks.

The teams line up for the National Anthem. (c) 1inawesomewonder (Photo by Fortin/Charron)

Now, on to tomorrow’s matchup. Back on January 6th, Merrimack beat Goffstown 2-0 at Sullivan Arena. It was the first game for both teams after the Christmas break, and a lot has happened since then. After the win on January 6th, Merrimack would lose 3 games in the next 5 days. They haven’t lost since. The Tomahawks finished the season with a 13-3-2 record, and haven’t lost since January 13th (10-0-2 in the streak).

Goffstown has a style all their own. The Grizzlies are the lowest scoring team of the 10 teams that qualified for the Tournament. Goffstown has struggled to find the net at times, both getting pucks to the net, and getting pucks into the net. But man, do they compete?!?! They just won’t go away. It’s a beautiful thing.

When the Grizzlies tangled with the Tomahawks in early January, both teams had 21 shots on goal. The Grizzlies trailed 1-0 for most of the game, right up until Merrimack scored an empty net goal with 20 seconds left in regulation. Obviously, no team is any hotter than the white-hot Tomahawks. Then again, they haven’t played a meaningful game since Feb. 25th. By tomorrow, that will be 16 days since they last played. The Grizzlies are now 6-2-1 in their last 9 outings and have started to generate some momentum themselves. Anything can happen as we all know, and tomorrow we will find out if any of these numbers mean a thing.

Grizzlies line up during pre-game. (c) 1inawesomewonder. (Photo by Charron) 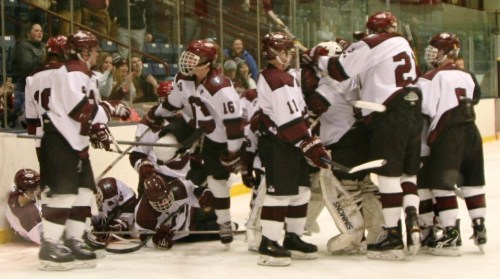 It’s Tournament Time! The Grizzlies host Lebanon tomorrow night (Wednesday 3/9 at 5:00pm @ Sullivan Arena) in the prelim round of the Division II Hockey Tournament. The Grizzlies earned the #7 seed and will host the #10 seed, Lebanon Raiders. The winner of Wednesday night’s game will advance to play #2 seed, Merrimack on Saturday afternoon.

It wasn’t too long ago, when the Goffstown Grizzlies Ice Hockey team found themselves mired in mediocrity. They were hovering at .500 with a 5-5 record, and were in the bottom half of the standings. It was the end of January and they were looking up at most of the division, with games against perennial powerhouses, Dover and Spaulding staring them in the face. Throw in a 10-day layoff, a hole in the schedule if you will, and the Grizzlies went to play at Dover on February 10th.

As it turned out, the Grizzlies beat Dover and Spaulding back-to-back and started to shape their season in a different manner. The Grizzlies would end up going 5-2-1 over their last 8 games and would catapult up the standings from as low as 12th, all the way to 7th seed, and hosting a first round tournament game. 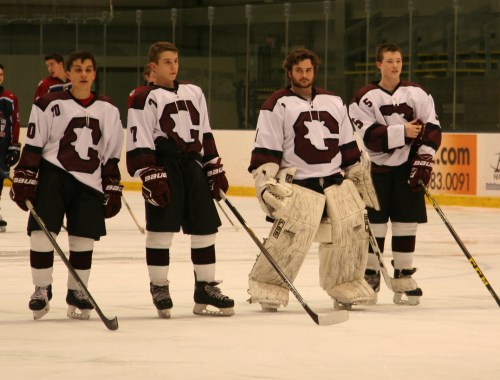 Goffstown will play host to the Lebanon Raiders whom they tied 2-2 up at Campion Rink less than two weeks ago. The Raiders finished in the #10 spot by finishing strong, going 6-2-1 down the stretch, ending the regular season with an 8-8-2 record.

For some notes that we can compare, between these two teams, I give you the following. Both Lebanon and Goffstown played several common opponents this season. Among the common opponents, the edge goes to the Grizzlies, Goffstown was 8-7, while Lebanon was 5-8 against teams they played in common. Against teams that qualified for the tournament, again the Grizzlies had the advantage, going 3-7-1 while the Raiders were 0-7-1 against playoff contenders, the one tie being against the Grizzlies.

Both teams finished the regular season on a strong note. Combined, they were 11-4-2 down the stretch. They played each other recently which should make for an even more exciting matchup in the first round. In their meeting on Feb. 27, the Grizzlies made a long bus ride on a Saturday afternoon on the final weekend of Feb. vacation week, just hours after losing a physical battle against the Keene BlackBirds. After the first period in that game, the Grizzlies carried the play for the most part. Then again, this is why they play the games. Anything can happen out there.

The Goffstown Grizzlies are playing their final home game of the 2015-16 season on Wednesday night, and it happens to be a Tournament game. So, Grizzlies’ Nation, come out and wear your maroon, have fun, and be loud! I can tell you that after being at Sullivan Arena on Sunday for the 2016 NEPSAC (Prep Schools) Ice Hockey Championships, where nobody was a ‘home’ team; it can get really loud in the arena at St. Anselm College. So come out and support the Grizzlies Hockey team on Wednesday at 5pm.