In my house we watch a lot of sports. My wife and I both played sports growing up. The kids have played many sports, all of their lives. Sports, not much gets better.

To compete, to go after something, only to lose, or to win. It’s healthy. There’s nothing better for a person who competes, to learn both sides of that coin. Preparation, planning, and execution, all measured, all with feedback. What a way to learn. 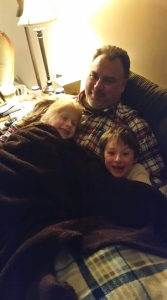 The twins snuggled on me for the second half and overtime of last night’s miraculous Super Bowl comeback win by the Patriots. (C) 1inawesomewonder 2017.

Then, add humility and grace, hopefully gained along the way. Wow, nothing better than that. True champions, the best of competitors, understand how fine the line is between winning and losing. They humbly recognize how closely related, winning and losing can be. The true competitors learn to graciously accept the result, either way, after leaving it all on the field of battle. It’s beautiful.

These things said, I must admit that I, we, do get caught up in the thrill of competition here. Recently, the twins and I may have been late to school as we got up and watched the end of the Nadal vs. Dimitrov match in the Australian Open semi-final. Then, after last night, with the twins snuggled on me for the entire second half and my wife beside me, we were a little sluggish this morning.

I did watch the last two Patriots drives again this morning, this time without the symptoms of a sports heart attack. Miraculous.

This was Williams vs. Keys; Pure, Free, Easy, Power.

My day started at midnight, kind of. All days start around then, but this morning was different. I had gone to bed, fallen asleep, left the TV on, only to wake up just after midnight. When I woke I noticed the TV was still on (odd for me to fall asleep with the TV still on). The Serena Williams – Madison Keys Australian Open semi-final was nearly over, but still playing live, there in my bedroom. Williams had won the first set and had just held serve to take a commanding 5 games to 1 game lead in the second set. For most this might have been a glance at the score moment and shut the TV off to resume a good night’s sleep. Not for me.

For some reason, I found myself asking myself, “Will Serena, the great champion, just break Madison’s serve and end this match? Will she impose her killer instinct on the youngster and snatch this final service game, the match, and trip to the Finals, just because she can? Or, will Madison make this stand, making herself a little bit better for the next tournament? Can she impose her will, win her last (presumably) service game and make the great champion serve out the match on her racquet?” I really did ask myself these things, which is why I kept the TV on, and watched the rest of the match even though Serena had already broken Ms. Keys’ serve twice in the second set.

What unfolded over the next 15 minutes or so, was, well, like the torch was being shown, maybe slightly prepped to be passed, but then pulled back as if to say, it’s not time yet. Maybe next time. 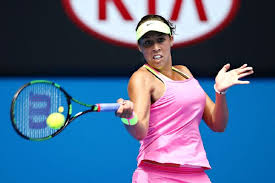 I am just a guy who watched the beginning of the match, and then the very end of the match, from the other side of the globe. I am not an expert in anything, but this moment struck me. Keys served to Williams, down a set, down 5-1 in the second set, and having shown her service games were sketchy at best in set 2. Quickly, Keys found herself down 30-40, giving Williams her first Match Point. Keys walloped an ace. 40-40, Deuce #1 was reached. I won’t go through all of the scoring here, but I will say this. Somewhere early in this 7th game of the second set; a game that lasted some 10 minutes, the players took their games to a level of power I don’t think I have ever seen in Women’s Tennis before this morning. Maybe because Keys, with nothing to lose except the pride of being able to hold serve one last time, would just air it all out. She did. Maybe Williams let it fly, because even though she wanted to end it NOW, she knew in the back of her mind, she could serve it out, boasting the greatest serve in the history of Women’s Tennis. Either way, both players played with pace neither of them had ever seen consistently in match play, ever before. Keys served big, Williams put returns at Madison’s feet and deep to the corners. Keys kept answering the bell with powerful winners and heavy ground strokes that surprised Serena at times. Williams even returned serves that were out, struck long, with as much gusto as the best returners of all time. Everything came over the net with an urgency others just don’t match. Match Point numbers 5, 6, and 7 all came and went. There were 9 Deuce’s in the game. It was like someone tore the cover off of this match and allowed the game to breathe. In doing so, these two played like there were no consequences. Any boundaries previously conceived as to whom could do what, or whom could control this or that, went out the window. This was pure, free, easy, power. If there were nerves present, well, they just stepped aside and watched like the rest of us. Keys snapped a forehand winner inside the line, at 90 MPH. Seven Match Points saved, 9 Deuces along the way, and Madison Keys finally held her serve. The crowd roared throughout, witnessing the guts to battle to the end. The commentary and crowd alike, appreciated this effort and the wonderment before their eyes. The pure, free, easy, power. The challenge, oh great champion you’re going to need to serve this one out because I might lose this match yet, but I am not done here. Not yet. 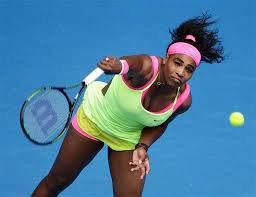 Serena Williams served in the eighth game of the second set trying to earn a spot in the Final, and a chance to win her 19th Grand Slam Title. Williams lost the first point before reaching a 40-30 advantage and Match Point #8. Keys had the answer again, and they played on. Keep in mind that nearly every point, every rally, featured two women striking the ball with forces rarely, if ever, seen in Women’s Tennis. I can’t stress this enough. Not one player dominating, and pounding winner after winner, but both players standing up and pounding the ball like they were fighters standing toe-to-toe and throwing hay-makers at each other. It was amazing! Finally, Match Point #9 and Williams strikes an ace up the “T” on her second serve and wins the match. The crowd roared in approval of what they had just seen, especially in the last two games. The players, who just seconds prior, had been firing serves well over 100 MPH and ground strokes that register higher on the radar guns than many players first serves at each other, met at the net to shake hands. Keys extended her hand, showing a refreshing smile, and Williams just reached across and gave her a big hug. The players shared some words, both appeared to feel and to show a mutual admiration for each others’ game as they shook hands with the umpire. Keys left the court quickly to a thundering applause which also included Serena Williams clapping her racquet as the 19-year old walked of the court. Serena said it was an honor to play Madison and spoke of how she admired both her opponent as well as her positive approach. Ms. Williams will play another heavy hitter in the Final when she squares off against Maria Sharapova. 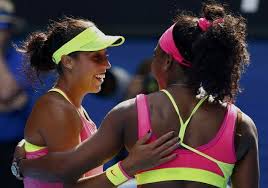 For me, I shut off the TV. I went back to sleep. But before I did, I thought these thoughts so as to share them with you all. And now, nearly 13 hours later, I am so glad I got to see those last two games. This was Williams vs. Keys; pure, free, easy, power.