Baseball season has opened. Spring has started, but not yet sprung. Then there are still some prominent New Hampshire high school hockey players still playing hockey. They are playing at National Championships in places like East Lansing and Lansing, Michigan, as well as Dallas and Plano, Texas. They are playing against competition from all over the country.

As you may, or may not, know, I have a passion for covering hockey here. Especially, Goffstown High School hockey, but also much about hockey in New Hampshire. So, these National Championships are full of high school players from around the country, including NH. Goffstown High School is represented by Nick Nault and Noah Charron on the NH Avalanche 18U team, and Griffin Cook on the Manchester Flames 16U team.

Disclaimer: Okay, HockeyTV has not yet embraced the idea of offering/sharing clips and highlights for free, as a selling point to get more subscriptions to watch live games. So, it would cost some money to watch games, highlights, clips, etc.

Believe it or not, you can watch these games online. Register with HockeyTV, subscribe (it does cost something), and you will have access to any games you want, in any of the sites. My profile on HockeyTV is 1inawesomewonder. You can follow me on the site if you subscribe, and I have compiled video clips, or highlights of the goals scored by the NH Avalanche 18u team and by the Manchester Flames 16u teams during game play on Thursday, April 6th and Friday, April 7th. I could post the links to each video, but you cannot see them without a subscription. If you have a subscription with HockeyTV, then you can follow me, and see the clips to all of the goals.

The NH Avalanche 18U team is playing in Michigan.

The Manchester Flames 16U team is playing in Texas.

It’s Been a Year Dad: Lessen or Lesson

It’s been a year now, 12 whole months since a life here expired. I remember the weeks leading to the day that we all knew would come sometime. There was so much support, many prayers and efforts, regardless of being tired. Amid the details though, it wasn’t too difficult, a beautiful love, to find.

END_OF_DOCUMENT_TOKEN_TO_BE_REPLACED

Tagged #iloveyoudad, #ImissmyDad, 1inawesomewonder, @1inawesomewondr, be real, Beal blog, believe, born again, challenge, everlasting life, faith, feel, get over yourself, I am flawed, John Beal, John R Beal, lay it on the line, let it go, nobody is perfect, one year, peace, remembering my dad, Rev. John Beal, see you in heaven, SWBeal, thank you Lord, there is no script, there is One way, when the roll is called up yonder, where are you headed?

Well, the results are in, and the Nationals are over with. New Hampshire high school hockey was pretty well represented in Michigan and also in Texas. The New Hampshire Avalanche 18U and the Manchester Flames 16U teams both made the trip to their respective Tier II National Championship tournaments. I purchased a subscription to HockeyTV so that I could watch both teams play. END_OF_DOCUMENT_TOKEN_TO_BE_REPLACED

The New Hampshire Avalanche 18U team is playing for the Tier II Division 2A USA Hockey National Championship tomorrow at 10am! This press release is meant to be informational and also serve as a summary of how the NH Avalanche 18U team reached the final. END_OF_DOCUMENT_TOKEN_TO_BE_REPLACED

Baseball season has opened. Spring has started, but not yet sprung. Then there are still some prominent New Hampshire high school hockey players still playing hockey. END_OF_DOCUMENT_TOKEN_TO_BE_REPLACED

The Northern Lights forecast that I check periodically.

Late on the evening of March 29, 2017, somewhere around 11:00 pm, I was compelled to check a website that I check off and on, throughout the year. I am not sure why I was prompted to check this site on that night but I did. END_OF_DOCUMENT_TOKEN_TO_BE_REPLACED

CONGRATULATIONS to the Grizzlies Honored This Season! The 2016-2017 Hockey Season was a special one, and there is a wonderful tradition building right here in Goffstown. Who will step up next season and take their game to the next level? #GOGRIZZLIES 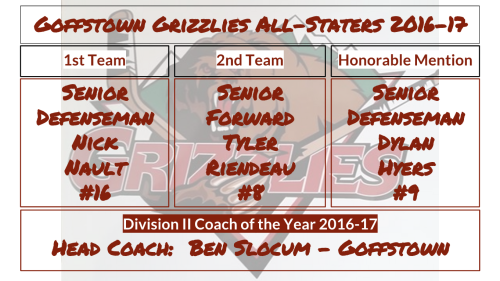