God Bless the USA! I love our country, a gift to us all from those who have fought, risked everything, and won, long before any of us were here.

END_OF_DOCUMENT_TOKEN_TO_BE_REPLACED

NYC From a Phone

Part Two of our trip to NYC at Christmas time.

Part one is here.

END_OF_DOCUMENT_TOKEN_TO_BE_REPLACED

2016 Election From A Small State Where It All Begins

It’s after 1am. I am wide awake. I couldn’t sleep if I wanted to. Not now anyways. This election for the President of the United States is not over, yet. Sitting here, I can still see Hillary Clinton pulling this out, and I can also see Donald J. Trump winning this election. Time will tell, and soon (hopefully).

Unfortunately, I have spent too much time on social media recently, mostly reading what others are saying. As I read comments, and more comments that are liked by the friends that I have who clearly have voted for Clinton, and the establishment; I am actually shocked. As I hypothetically apply such commentary to me personally, I am mortified at the things, names, titles, stereotypes, etc. that would be applied to me as a person. Now, in a different breath, I am certain that many, if not all, of these people who I know, do not see me as any of those things. Furthermore, regardless of the result in this election, I would shake hands with, or give a warm, welcoming hug to these people, were I to see them tomorrow. So, I battle the predicament of taking things personally, while pursuing what I hold dearest to me.

I didn’t write it, but I started to do so several times in the last few weeks. With the diversity found within our borders in this day and age, I find it nearly impossible that any one candidate could perfectly encapsulate, in platform, everyone’s best interest, or even one person’s. So that makes me wonder how outrageous and, quite frankly, frightening some of the commentary has been.

This is where I have to wonder how differently people see our country. I want to be proud of the United States of America, and mean it. I want our country to be great now, then, again, always. I want our people to be as safe as they can be. I value our veterans immensely, and they should be better cared for, always. I want my kids, and their kids, to be safe, and to have a place where Americans can get work, and perform in fields of employment with the best in the entire world. I do want one flag. One country. One God. I want us to be indivisible, maintaining liberty, and justice for all.

I have said for many years, that it is no mistake that the greatest organizations in the history of the world, have one thing, among other things, in common; and that is good leadership, good people, in positions, making good decisions. Personally, I feel as though our country has slacked off in this area, at an alarming rate for many, many years. I certainly don’t know what the future holds, but I do like hope.

As we pass 2am here in the East, one thing is absolutely certain; people are fed up with the way that politics have been done, and for some time now. At this point, only God knows who our next president will be. And I am good with that. God is the One I go to for help on these matters. Prayer, sincere, reverent prayer, when my ego, my plan, and my desires are shelved just to talk with God; this is when a clear, peaceful mind emerges. That is a good thing.

I am not against any one of any color, sex, or heritage being our president. Period. There is nothing to read into here. Listen, I am not a Hillary Clinton fan. She doesn’t come across to me as a loving, caring, sincerely interested in much outside of herself, type of person. Quite frankly, neither does Donald Trump. For the last two months, Hillary has told us in her ads and empty speeches, not specifically what she will do, and worse, she has stepped on opponents in an attempt to raise herself up. That last point is the only commercial loop I have seen from her for weeks and weeks. I get it, Trump is no angel either. To each of us, some things resonate, and other things do not.

After much prayer and research on the facts, and the promises yet to be kept, it became clear in which direction I would go.

So, here it is, in my own words, my own thoughts. I don’t know how you were raised, but I do know how many of my friends were raised. I see it like this. In my day, the household, especially us teens at the time, were always a little fearful when Dad was coming home, after we had been acting up. Because Dad would get the report from Mom, and discipline would follow, and guess what, rightfully so. Well, my friends, and each of you, in my opinion, we, the USA, have been acting up for some time. Whether or not Mr. Trump wins this election, people are fearful because just the thought of the instrument of correction coming back to the United States has turned this election into a dead heat that almost nobody saw coming. Correction and discipline in our society, it is so badly needed. Our quite imperfect founding fathers would be laughing at us for becoming the soft, whiney, entitled country that we have become. I don’t want that for us, for any of us. The left, the right, whatever, I want America to be great again, for every one of us. We may live in a great lifestyle, with freedoms that we enjoy, yet we are a still a shadow of what we once were, as a country.

Well, there you have it. I went there. A political piece on a night that won’t end. I haven’t said a whole lot to anyone about this stuff, so here, I share my opinion, or at least some of it. Thank you for your patience, from a small state in the northeast. 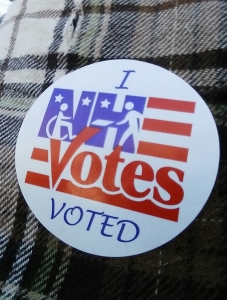 Enjoying the freedoms we still have.

May God bless the USA.

It’s Tournament Time, and the Grizzlies have advanced to the NHIAA Division II Ice Hockey Quarter-Finals! The Grizzlies travel to West Side Arena in Manchester, NH to take on the #2 seed, Merrimack Tomahawks. The puck drops at 4pm tomorrow, Saturday, March 12th at West Side Arena. For you Grizzlies’ fans, come out and support your #7 seed, Goffstown Grizzlies.

Before I get into this brief preview, full of stats and numbers that often times don’t matter once the puck drops, I have one other thing that does matter, and I have wanted to cover this for quite some time. Recently, a video has made its way around cyberspace providing perfect segway to get this teaching moment off of my chest.

I have discussed this with my kids long before this video came around, but I encourage any parent or coach to share this with their kids or their players, early, and often if needed. This is about honor and respect. It’s about our flag, our anthem, our country. My kids will tell you that my favorite song is our National Anthem (it’s true). So, I share this video. Just click on the link and take the 4+ minutes required to watch it. Share it and make sure this generation understands what it all stands for. It drives me crazy when I see players, coaches, or anyone else who can’t stand up straight and quit being a distraction or being distracted long enough to honor our country. Again, this isn’t about views or sides, but about honor and respect; two things that this world could use a lot more of. Thanks.

The teams line up for the National Anthem. (c) 1inawesomewonder (Photo by Fortin/Charron)

Now, on to tomorrow’s matchup. Back on January 6th, Merrimack beat Goffstown 2-0 at Sullivan Arena. It was the first game for both teams after the Christmas break, and a lot has happened since then. After the win on January 6th, Merrimack would lose 3 games in the next 5 days. They haven’t lost since. The Tomahawks finished the season with a 13-3-2 record, and haven’t lost since January 13th (10-0-2 in the streak).

Goffstown has a style all their own. The Grizzlies are the lowest scoring team of the 10 teams that qualified for the Tournament. Goffstown has struggled to find the net at times, both getting pucks to the net, and getting pucks into the net. But man, do they compete?!?! They just won’t go away. It’s a beautiful thing.

When the Grizzlies tangled with the Tomahawks in early January, both teams had 21 shots on goal. The Grizzlies trailed 1-0 for most of the game, right up until Merrimack scored an empty net goal with 20 seconds left in regulation. Obviously, no team is any hotter than the white-hot Tomahawks. Then again, they haven’t played a meaningful game since Feb. 25th. By tomorrow, that will be 16 days since they last played. The Grizzlies are now 6-2-1 in their last 9 outings and have started to generate some momentum themselves. Anything can happen as we all know, and tomorrow we will find out if any of these numbers mean a thing.

Grizzlies line up during pre-game. (c) 1inawesomewonder. (Photo by Charron)