Misery and gloom are associated with distress and anxiety. And these emotions could have played major roles in tonight’s home game against the undefeated Keene Blackbirds. Especially when Keene scored six unanswered goals over a span of  17 minutes. But the Grizzlies kept skating. They kept competing. They kept getting scoring chances. The final score was 8-3 in favor of the Blackbirds, who improved to 13-0 on the season. Goffstown did battle, and they did get some great chances to score. Myles Ditkoff was solid in net for the visiting Keene squad, making 26 saves on 29 shots. Keene had only allowed as many as 2 goals in a single game, just once this season. Tonight, they allowed 3 goals to the Grizzlies.

Wednesday night in Goffstown, on a date in between a pair of snowstorms, the Grizzlies matched their 8-4 record against the undefeated, high and mighty, 12-0 Keene Blackbirds. The game would get chippy despite some early attempts by the officials to make calls in order to keep peace, and cut down on the stick work. Although, the calls seemed to help, in the short-term. It wasn’t too long though, before hits and sticks started getting higher and harder. Tempers did flare up before all was said and done. I have to wonder if the fact that Goffstown wouldn’t go away, had something to do with it.

Brett Branscum on the move against the Blackbirds. (C) 1inawesomewonder 2017. (Photo by Charron)

Goffstown actually led this game 1-0, just 2:51 into the first period. The Grizzlies drew two quick penalties on the visiting Blackbirds in the first two minutes. Goffstown had a 5-on-3 advantage for 46 seconds, but could not score. Then, just 12 seconds after the first penalty expired, the Grizzlies capitalized after a barrage of shots, rebounds, and traffic in front of the net. Griffin Cook collected the assist, and Tyler Riendeau buried his sixth goal of the season at 2:51. Oddly, there were no more penalties called in the opening period, even though a lot of the same infractions continued to happen.

After getting a first hand look at the Bow Falcons last Wednesday night, and now the Keene Blackbirds tonight, I noticed one huge similarity. Supreme confidence. Keene, like Bow last week, just kept pouring on the onslaught of hard skating, puck movement, and looking for open teammates. In a perfect hockey world, teams would play their game to highest level regardless of their opponent. Keene, and Bow too, play that way. Keene brought their game to the Grizzlies in shift after shift, for nearly the entire game. Unfortunately, for the Grizzlies, the combination of Keene’s skill and one of the only off-night’s from Goffstown goaltending, led to an onslaught of goals. Keene got on the board at 5:31 of the period when Hunter Gallant scored, unassisted. Later, during the same shift, Gallant scored again with the assist going to Luke Plumley, at 9:03. It took only 48 seconds for the Blackbirds to score again, when Nathanael Darwin was left all alone in front of the net.

Colin Burke fires a shot against Keene, with Sebastian Beal near by. (C) 1inawesomewonder 2017. (Photo by Charron)

His goal was also unassisted. Captain Jason Langevin scored at 12:46 with the assist going to Hunter Gallant. The period would end with the Grizzlies trailing 4-1. Both teams registered 11 shots on goal, and honestly, Goffstown had the better scoring chances with several shots labeled to primary scoring areas on the net. Myles Ditkoff who was in the correct positions, and taking good angles all night, made 10 saves to maintain Keene’s 3-goal lead after 15 minutes. 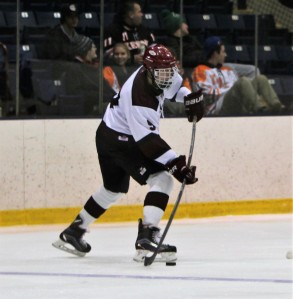 Perhaps a bit shell-shocked, or even a little deflated, the Grizzlies didn’t have the same sting in the middle period. Goffstown made a change in goal, inserting Kyle LaSella in net to start the second period. Looking for a spark, or a change in the result, didn’t do much to make a difference, at first. The first half of the period was totally dominated by Keene. Keene’s Nathanael Darwin scored a power play goal set up by Jason Langevin at 4:41. Then Cody Shield scored after being set up by Jason Langevin and Hunter Gallant at 7:17. At the time, Keene led 6-1 on the scoreboard, and had come out firing, with a 9-2 lead in shots in the period.

Goffstown did get their legs moving a bit, and did draw a couple of penalties on the Blackbirds. The Grizzlies couldn’t get a puck past Ditkoff in net though. Then the Grizzlies increase in intensity caused a Keene turnover, and Nick Nault snatched the puck, walked to the slot and beat Ditkoff with a shot to the back of the net. The goal, his 13th, was unassisted at 11:51 of the second period. The line of Maggie Fifield, Colby Gamache, and Brett Branscum, along with Nault and Jacob Noonan had spent quite a bit of time possessing the puck, and keeping Keene from clearing the puck from the zone before getting the goal. The period would end with the Grizzlies trailing 6-2. Keene held a 25-17 advantage in shots. But, when I thought that the final period might be played largely with a running clock, something had started to happen that would continue into the final period. Kyle LaSella saved 12 of 14 shots he had faced in the period, and that seemed to restore some confidence to the home team. 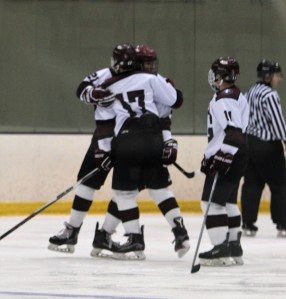 In the third period, the Grizzlies started by giving up a gift goal to Keene with a turnover and not much defensive help when Hunter Gallant scored his third goal of the game, assisted by Cody Shield, at 2:36. Goffstown trailed 7-2. The Grizzlies showed some grit and resilience through the final period, and ended up out shooting Keene 12-9. At 6:30, Sebastian Beal scored his 8th goal of the season for Goffstown on a rebound, after Maggie Fifield had a pair of point-blank shots that Myles Ditkoff turned away. Max Lajeunesse, Jacob Noonan, and Colin Burke were also on the ice for the goal, after keeping all kinds of pressure on the Blackbirds in their own end. In the last two minutes, at 13:01, Cody Shield capitalized on some shoddy defense played by Goffstown to make the score 8-3. The goal was unassisted, and was the second goal of the game for Shield. Seconds later, Nick Nault was called for a 5-minute boarding penalty that could only be categorized as a frustration penalty. The game ended with Keene winning their 13th game of the season against zero losses, 8-3. The Grizzlies dropped to 8-5, losing their third straight contest.

Maggie Fifield had some of the best scoring chances for the Grizzlies against Keene. (C) 1inawesomewonder 2017. (Photo by Charron)

As the season draws to a close, the standings in Division II are getting a much closer look by many folks around the game. Last night, Dover had their 7-game win streak snapped by St. Thomas, 3-0. Dover dropped to 9-5, while St. Thomas evened their record at 6-6. Windham beat Oyster River, 6-3, and they continue to hold the 3rd seed, while Oyster River dropped to 5-6 thus far. So as of last night’s action, Keene is #1 at 13-0. Bow is #2 at 12-1-1. Windham is #3 at 10-3-1. Dover hangs on to #4 with a 9-5 record. Goffstown is #5 at 8-5, just ahead of Spaulding (#6) at 7-5, after they beat Kingswood 6-1. By virtue of their victory over Dover, St. Thomas leap frogs Oyster River into the #7 spot. Things are tightening up as teams meet for the second time in some cases, or other are find their stride, while still others, are playing the toughest parts of their schedules down the stretch.

Goffstown won’t see game action again, until Monday night, February 13th, when they host Division III powerhouse and front-runner, Belmont-Gilford. Belmont-Gilford is 11-1-1 and they have not lost a game since last year, December 14th. Last year the Red Raiders gave the Grizzlies all they could handle in Goffstown’s 7-6 win that featured an all-out offensive war. The pucks drop at 7:30pm Monday night at Sullivan Arena on the beautiful campus of St. Anselm College 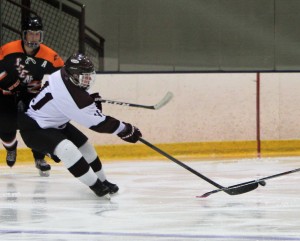