The Goffstown bench in the Grizzlies den. (C) 2017 1inawesomewonder. (Photo by Charron)

Colin Burke and Tyler Riendeau get back to support Kyle LaSella in net for the Grizzlies. (C) 1inawesomewonder 2017. (Photo by Charron)

My accounts get a fair amount of attention, whether I am looking for it or not. In the tradition of team and player coverage that I have been writing for the last 15 plus years, I reiterate that these accounts are for the kids, because of the kids, and in recognition of the kids, as they should be.

Let me start by saying, Great game Kyle LaSella! Goffstown earned their first shutout victory since Feb. 29, 2016, with a 3-0 win against Kingswood on Saturday night. Even with the 3-0 win, the score did not represent the domination of play executed by the Grizzlies. Goffstown came out of the gate at full speed.

Goffstown scored the only 2 goals of the first period, but that was only part of the story. The Grizzlies dominated play and held a 23-3, shots on net, advantage at the end of the opening period. Not only that, the Grizzlies, with their skating and puck movement, drew four penalties on the Kingswood Knights. The Grizzlies would go 0-4 on the power play in the period, but did get a shorthanded tally. Just 2:20 into the game, Mickey Bridgeman scored a shorthanded goal for the Grizzlies on a sweet set up from Max Lajeunesse. The Grizzlies would continue to bring the play right to the doorstep of the Knights from Kingswood. Knights’ goaltender Joseph Vetanze was pretty much outstanding on Saturday night. Before all was said and done, he would make 40 saves on the evening. Even with all of the saves, Goffstown’s offensive onslaught still led to 3 goals, and their 7th win of the season. Before the opening period was done, Tyler Riendeau scored to cap a long offensive possession of the puck for the Grizzlies. The goal was unassisted.

After the period ended, the Kingswood coaching staff and team remained on the bench along the far side of the rink for the entire intermission. There they all sat, to be coached up, and to reflect on the way the opening 15 minutes played out. Whatever the motivation may have been, the second period was played much differently than the first. There would be no scoring in the second period. Goffstown would get 10 more shots on goal, while Kingswood had 8 shots. Only one penalty per side was whistled in the middle period. The Knights were much better at moving the puck out of their own end, and they were able to create much better spacing and

speed coming up ice. One such rush up ice led to Kingswood defenseman, Sam Barton breaking into the zone, and clanging a rising shot off of the crossbar, and over the net, at 2:31 of the second period. Goffstown goaltender, Kyle LaSella, made 8 saves in the period, and a couple of them were beautiful right pad saves to kick the puck out of harm’s way at the last possible second. After a fast flowing, up and down, period with very few whistles, the Grizzlies held their 2-0 lead going into the final period.

Kingswood’s effort was much improved in the second period, and they did retreat to their locker room for the second intermission. In the third period, the Grizzlies would return to their forecheck and applying pressure all over the ice.

The Grizzlies would be called for the only two penalties of the period, but were able to aggressively kill the penalties. On their first penalty kill of the period they spent the first minute hemming the Knights in their own end with tremendous pressure, skating, and puck movement. Late in the third period, just seconds after killing another penalty, the Grizzlies got the insurance goal that they had been pounding the net for. The play started back in their own end with a long pass by Colin Burke ahead to Griffin Cook. Cook carried the puck and made a perfectly timed pass, catching Noah Charron with speed. Charron broke through a layer of defense ripped a shot past Vetanze in net for the Knights, giving the home team a 3-0 lead with 2:08 to play.

The final score would be 3-0, and Kyle LaSella earned a 16 save shutout, while Joseph Vetanze saved 40 of 43 shots in the loss. Reflecting some team depth, eleven different Grizzlies (Milanes, Cook, Bridgeman, T. Riendeau, Lajeunesse, Noonan, Hyers, Charron, Burke, Lassonde, and M. Riendeau) left the ice with at least a +1 rating for the game.

After a week that saw several of the Goffstown players battling various illnesses, it was good to see the Grizzlies playing with good energy and speed. Goffstown received effective play, shift after shift, with all 3+ lines. Saturday night, in my opinion, was one of the best, top to bottom, team efforts of the season

. Goffstown will need this level of play, and more, as they head into a week where they play host to Oyster River on Monday, hit the road against Bow (10-1-1) and finish the week with a Saturday night tilt at UNH against Oyster River again.

The Grizzlies will return to home ice on Monday night to play Oyster River at 7:30pm in Sullivan Arena on the campus of St. Anselm College. 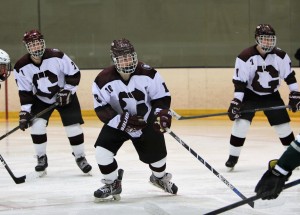