Nick Nault uses every inch of his reach to control a puck at St. Thomas. (C) 1inawesomewonder 2017. (Photo by Charron)

Maybe all Goffstown’s away games will be decided in overtime. Early this evening, the Grizzlies traveled to Dover to play the Saints of St. Thomas. This was the fourth road game for Goffstown in NHIAA play, and it turned out to be the fourth time a road game has gone into overtime. As it would turn out, Dylan Hyers would sneak a shot just inside the far post to send Goffstown home victorious.

After Monday’s game at Lebanon was postponed, for the second time this season, there was no school on Tuesday. There was no practice on Tuesday as a result of the weather. Sunday was also, a day off from hockey. Whether or not those factors contributed to the game today, I am not certain. But the Grizzlies did find themselves chasing the Saints at times on Wednesday evening.  St. Thomas moved the puck pretty well, and they had good team speed to go with it.

All eyes on the corner as Tyler Riendeau circles the ice. (C) 1inawesomewonder 2017. (Photo by Charron)

Goffstown scored first. Mickey Bridgeman threw a puck on net that got behind goaltender, Aidan McLoughlin, just 20 seconds into the opening shift of the game. Tyler “The Rocket Rondo” Riendeau got the lone assist on the goal. The rest of the period really belonged to St. Thomas though. The Saints outshot the Grizzlies 10-6 in the period, and carried the play. There was only one penalty called in the period and that was a tripping call on Nick Nault of Goffstown. Goffstown’s goalie, Curtis McKay, made his presence felt in the opening period with several saves, including a pair of gems on, St. Thomas’ best skater, Joe Grella at point-blank range. The opening period would end with the Grizzlies leading 1-0, but holding on tight to their lead.

Up close and personal, Colin Burke lets a shot go against. the Saints. (C) 1inawesomewonder 2017. (Photo by Charron)

St. Thomas scored first in the middle period, to tie the game at 1-1. The goal was scored by Christian Torr and assisted by Tucker Whitcomb, at 3:41. The second period’s complexion was drastically different from the opening period, as 10 penalties were called. Goffstown was whistled for 6 of them, and being shorthanded, or having to expend much energy to kill penalties, would certainly take its toll on the visitors. Goffstown was able to maneuver through a minefield of St. Thomas offensive pressure without being blown out. This was thanks to McKay in net. Curtis McKay made another pair of sensational saves while his teammates were trying to make it through a 5-on-3 disadvantage unscathed. McKay stood on his head, as they say, and the Grizzlies held the score at 1-1. Noah Charron and Nick Nault both had breakaway chances, in all alone, while shorthanded, but neither could get the puck past McLoughlin. Then with just 21 seconds left in the period, Sebastian Beal scored a goal for Goffstown when he poke checked a loose puck by a Saints defender, and got a shot past McLoughlin to give Goffstown a 2-1 lead that they would take to the final period. Brett Lassonde and Tyler Riendeau assisted on Beal’s goal. Through two periods, the home team led the shot battle 21-14. 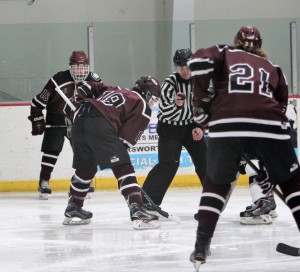 The Grizzlies line up with Nick Nault, Noah Charron, and Colin Burke at Dover Arena. (C) 1inawesomewonder 2017. (Photo by Charron)

St. Thomas came out and imposed their will on the Grizzlies right from the opening faceoff of the final period. Goffstown had a very difficult time to start the period, with several shifts barely getting the puck out of their own end. Then before you could predict what was coming next, St. Thomas scored to tie the game, 2-2. Eric Keilty scored the tying goal for St. Thomas, with assists going to Brock Crowley and Joe Grella. Goffstown answered when defenseman, Jacob Noonan, took a nice shot from the right point, that was redirected en route to the net, and beat Aidan McLoughlin to give the Grizzlies a 3-2 lead. Maggie Fifield and Colby Gamache set up the play, with each of them getting an assist. Less than 90 seconds later, the speed of Joe Grella would burn the Grizzlies again.

With the defensive pairing of Dylan Hyers and Melanie Riendeau on the ice, the Saints would create a turnover in the neutral zone. Hyers would take out one onrushing St. Thomas forward, but Joe Grella would get behind the Grizzlies until Tyler Riendeau would catch Grella but haul him down on a hooking call that rewarded Grella with a penalty shot. After a brief explanation from the officials on the penalty call, Grella would approach Curtis McKay with the puck and his speed. McKay held his ground, but Grella had the better move and patience to put the puck into the net. The goal tied the game at 3-3, with 5:27 to play. Goffstown would have to kill another penalty before the period ended, which they did. Nick Nault was whistled for hooking penalty as regulation time expired with the game still tied. 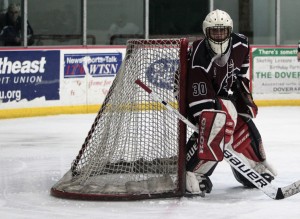 This young man, Curtis McKay, was rock solid in the Grizzlies win at St. Thomas. (C) 1inawesomewonder 2017. (Photo by Charron)

And, we went to overtime again. The Grizzlies started the overtime shorthanded, and St. Thomas got a decent shot on net, but McKay was up to the task, making the save. St. Thomas defenseman, Will Kaspari, ended up being called for tripping at 0:35, which helped Goffstown kill their penalty as they played 4-on-4 for the remaining penalty time. Just about the time that Goffstown seemed to be getting their second wind, Max Lajeunesse used his speed to break a play along the left-wing boards and carry the puck to the offensive zone. With a little shift to the inside, Max got a shot away, that glanced off of McLoughlin’s goal stick. Noah Charron would retrieve the rebound behind the net and sling it around the boards, back to Dylan Hyers at the right point. Hyers let a softer wrist shot go, as opposed to winding up for the slapper, because there was traffic in front of the net, and in his shooting lane. The puck was low and quick, finding its way just inside the far post, and behind McLoughlin. Hyers got the game-winner, with assists to Charron and Lajeunesse. St. Thomas outshot the Grizzlies in the game, 29-22, but the Grizzlies improved their overtime record to 2-2 this season.

The Grizzlies will return home on Saturday night to play Kingswood at 7:45pm in Sullivan Arena on the campus of St. Anselm College.