On Saturday afternoon, less than 24 hours after playing Keene at home, the Goffstown Grizzlies traveled to Campion Rink and slugged it out with Lebanon. Both teams are battling for a tournament spot, and both teams have multiple games left to play on their schedule while many teams are done their regular season already. Lebanon came into the game winning 4 of their last 5 games, just to give themselves a chance to sniff a tournament berth. Meanwhile, let’s be honest, the Grizzlies are competitive with everyone but you never know which version of their team will show up from game to game. So, then Saturday afternoon happened. 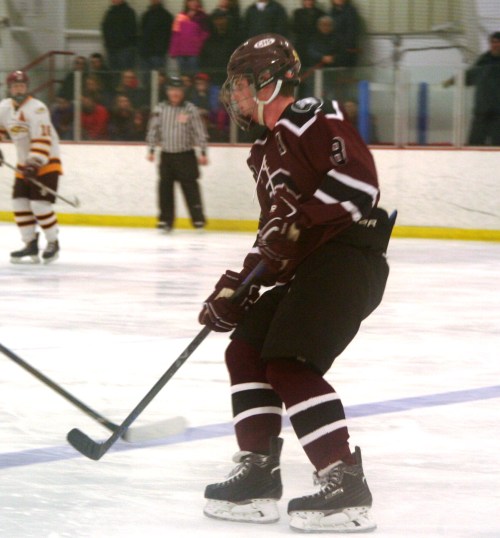 Tyler Riendeau on the move at Lebanon. (C) 1inawesomewonder. (Photo by Charron)

Now, many of you may disagree but I don’t consider myself to be much of a whiner, but then again, none of us do. Anyways, I noticed that the ice in Campion Rink was largely under water when the teams skated for the pre-game warmup. By the time the game began I would say there was much more ‘snow’ on the playing surface than what is normally there. I decided that maybe the teams were allowed onto the ice too soon, and that the second period might be better. When the officials came out with the teams to start the second period, I knew right away that I wasn’t alone in my assessment of the ice. I noticed one official playing the hockey version of ‘kick the can’ as he placed a puck flat in a puddle on the ice and proceeded to try to kick it to different locations on the ice as the puck repeatedly got stuck in wet spots all over the ice. It was kind of funny to watch but it didn’t bode well for a swift surface to play hockey upon. Either way, the game was played. For those of you keeping track though, it was roughly 11 minutes of game time into the second period before I saw the last puddles on the ice near where I was standing, actually start to refreeze.

The previous paragraph might help explain the first period from the Grizzlies’ perspective. Slow, sticky, and choppy at best. A long bus ride less than 24 hours after a physical game against Keene the night before might also explain some things. Then there was the home team, Lebanon, who played hard, hit everything they could, and showed their urgency to make a tournament run that had something to do with the opening period. There was only one penalty called in the first period when Goffstown’s Max Lajeunesse was called for waterskiing, er uh, hooking. Neither team scored although Lebanon outplayed Goffstown by a sizeable margin and led in shots on goal, 12-3.

The second period is where things started to change. Although the ice was wet, and soft, the play was at a faster pace. Passes started to connect here and there, and both teams had to skate hard to keep pace. Goffstown starting moving their feet which led to some penalties being called on the home team. However, as if they were trying to be gracious guests, Goffstown took penalties of their own on each of their first three power plays, therefore nullifying their man-advantage. Lebanon didn’t do much with their power plays either, but they did score first. Goffstown had an offensive zone faceoff, but lost it decisively, and Lebanon was off to the races. Nick Haidari found a sprinting Brendan Kelley, who broke clean right from the faceoff, and got behind Goffstown’s Dylan Hyers before ripping a wicked wrister into the top, far-side, corner over Colin Holts’ shoulder to give the Raiders a 1-0 lead halfway through the period. In between all of the minor penalties, Goffstown did tie the score at one apiece just four minutes later. Nick Nault and Griffin Cook made nice, short, quick passes, feeding the puck to Noah Charron who blew up the right-wing like a flash and uncorked a rapid wrister that beat Chad Fazio in the Lebanon net, and just like that, the game was tied. Roughly two minutes later, the Grizzlies finally buried a power play goal. After controlling the puck for most of the power play in the offensive end, Sam Greenwood calmly fed the puck from the half wall back to Nick Nault at the point. Nault let a wrist shot go, instead of his nasty slapper, and the puck bounced off of Fazio in net. Tyler Riendeau showed his stellar hand-eye coordination by swatting the rebound out of the air, cleanly, and into the back of the net, giving the Grizzlies a 2-1 lead which they would hold entering the final period. Goffstown enjoyed a 9-3 advantage in shots during the middle stanza. 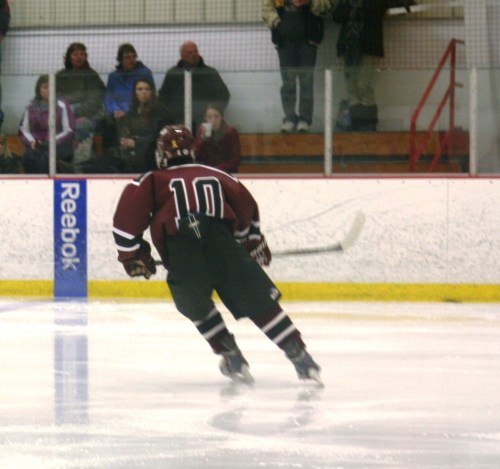 For those of you, who might compare these passages of time, watching water freeze is way cooler than watching grass grow, or watching paint dry. Pun intended. Anyways, the Zamboni cleaned the ice in between periods and I tried to force myself to look away. I lost. Oh well, they played the third period anyway. So, Goffstown led 2-1, and then Noah Charron was called for tripping on a play that looked more like a Lebanon player slipped and fell on a wet surface, which wasn’t entirely untrue. The penalty did give the Raiders their fourth power play, and the only one they would need to tie the score. After a Grizzlie rush up ice, nearly scoring a shorthanded goal, the Raiders returned fire, quickly. Lebanon’s Cal Garland used his speed to lead a charge into the offensive zone. He cut across the ice, pulling the defense and netminder, Colin Holt, with him only to deliver a beautiful pass back across the grain he had created, to Nate Gariepy who flipped the puck into the open side of the net. It was a gorgeous hockey play, and the game was tied at 2-2 with 12:55 to play. The rest of the period saw both teams play hard, with Goffstown maybe having a slight edge in chances, but regulation time would end in a 2-2 tie.

Overtime was almost completely dominated by the Grizzlies who seemed to get better with each passing minute. There were some penalties on both teams, in frustration of not being able to budge the immovable object that was their opponent for the day, and also a penalty of desperation. Both teams would end up having a power play opportunity in the 8 minute overtime period. Goffstown controlled the puck for most of the overtime, and they did everything but score on their power play. Chad Fazio made his best save of the game during that overtime power play when he turned into elastic man and somehow got a glove on a Nick Nault laser that was targeted for the top shelf where momma hides the cookies. After both teams’ fans went through minutes of holding their collective breath and maybe some gyrations willing a black rubber disc one way or another that nobody needed to see as pucks nearly ended this game along the way, the game ended in a 2-2 tie after 53 minutes of play. As a result, Lebanon is now 6-7-2 on the season with 3 games remaining. Goffstown has 2 games left, and now sits at 8-7-1 on the season. 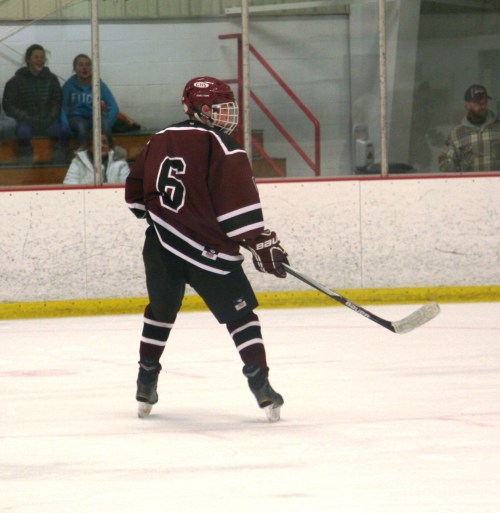 Ben Roy looks for a pass at Lebanon. (C) 1inawesomewonder. (Photo by Charron)

The Grizzlies return to home ice to finish the season with games on Monday night, February 29th (yes, it’s a Leap Year) at 730pm against Hollis-Brookline-Derryfield on “Bring your own refs night”. Then they finish the regular season when they host Windham on Wednesday night at 730pm. Both games are at Sullivan Arena on the campus of St. Anselm College in Goffstown, NH.

The thoughts and opinions expressed here are those of the individual contributors, mostly mine, and do not necessarily reflect the views of the schools, coaches, players, or characters listed in any of these blog posts. Or, maybe they do, but you would have to ask them directly. Maybe I am good at picking up on these things, and maybe I am not. I guess you can decide. Either way, “It’s a great day for hockey” ~ the late “Badger” Bob Johnson.