The highways weren’t what they are now. The times were longer and the family car was crowded. The times were most definitely simpler then. There weren’t games to play, isolating ourselves within the car, but games we played involving us all. I knew the make and model of almost every vehicle we saw along the way, we all did. I sat behind my dad in the car and I tried to take in everything he saw. I learned the landmarks and the places along the way where we stopped or some historical thing had happened. We brought our own water and food. Fast food was a homemade sandwich that mom pulled from her bag of prepared trip fare. Soon, the farms looked familiar, and the sight of each passing farm-house elevated my anticipation of our final destination. Then, finally, it was time for the right hand turn on to what is now called Boundary Line Road in Bridgewater, ME. The road wound its way through fields and farms until we reached the Canadian border. Crossing at customs almost always included an agent who knew someone in our family and a quick story or family update followed. Then we made our way in to Centreville. I could not wait to cross the Presque Isle Stream and turn left on to Charleston Road. Honestly, I didn’t even know that many of these roads had names. There were no street signs. I just learned what roads to take and what turns to make by watching my dad. Anyways, it was that left hand turn, which quickly turned into a dirt road that made my heart race. We were getting so close! Then cautiously around a sharp bend, that was so sharp while cutting under an old railroad trestle, that dad used to honk the horn to warn any oncoming car that we were in a blind spot and approaching. Then it was up and away from the stream, climbing for just a bit and then passing my uncle’s farm on the right. From there we could see the old homestead up on the next hill. Downhill from my uncle’s, across a little stream that ran around the back of the homestead property where the cows would drink and cool down. Then the final few feet, up from the little stream, taking a look back towards my uncle’s to see the trail of swirling dust we had left in our wake, and pulling into the dirt, circle drive way in front of the old farm-house. Ahhh! Finally, this little piece of heaven on earth was ours to enjoy for the next week or two.

Yes, the old homestead. This place was most definitely a favorite destination of mine in any season. The lay of the land, the abundant sky, the mystery of woods unexplored, and the rolling fields were part of the attraction. But, really it was the family that met in and around these four walls that set this piece of earth apart from all others.

The road wasn’t paved until I was nearing adulthood. The water was drawn at a hand pump well from across the road when I was a little boy. Kerosene lanterns accompanied us many nights when my dad, grandfather, and uncles played bid-on-dominoes ‘round the kitchen table after thunderstorms had knocked out power. A natural spring fed the faucet with the sweetest, coldest, best tasting water any of us ever drank. The basement was made of dirt, accessed by a ladder under the floor; It was full of potatoes and canned vegetables in jars. The milk, cheese, cream, and butter were made on site, mostly in the “summer kitchen.” Again, when I was a young boy, our clothes were washed in an old wringer washer, and then hung on the line running from a small, enclosed porch on the end of the “summer kitchen.” Woodstoves heated the home and provided the oven for cooking. The warmer above the stove in the kitchen was our favorite place to warm our hats, scarves, and mittens in the winter. The old dirt road was cleared of heavy snows by a dirt grader, when it could make it out there. With little man-made light the stars were memorable and seemed close enough to touch. The moon lit snow-covered fields to the point of rivaling the sun’s first glimpses of light. The cows were a constant, and often woke me like an alarm clock would now. The smell of bacon cooking in the morning was as predictable as the sun coming up, and just as welcome. The north room was cold, snow blew in around the window, and ice formed on the inside, as it should be.

The yard was often full of vehicles, uncles, aunts, and cousins, each doing their own thing, all within the family getting together. The grass was always green, and the smell now is still much the same as it was then; sweet, wild, natural, and clean. The sounds of silence still abound, but the silence was even more deafening when I was younger. There at the homestead, there was time, and there was space, and there was nothing else to distract us, pull at us, or even mildly entertain us. Activity. Imagination. Exploration. Chores. Helping. Responsibilities, big or small, were part of the days and nights. Work gloves and tools were the days’ video games. The views taken in with my own eyes was better than any television I could have watched, and there was very, very little of that anyways.

Today is Thanksgiving Day in Canada. I am so very thankful that I have so many wonderful memories of my Canadian family. I am truly blessed to have seen and experienced so many places in an around this section of New Brunswick. I have continued trips to this area and love to share any of these places and people with my kids. Times and places have changed, but I am thankful so many details remain. I have shared some pictures below. Some of these pictures have been posted online in the past. Today I wanted to share them again, add some different ones, and share in my thankfulness this Canadian holiday. This holiday, and recent chats with members of the Canadian side of my family, has left me longing for this place, one of my favorite destinations, the old homestead.

The homestead, November 2008. I am standing just south of the home. 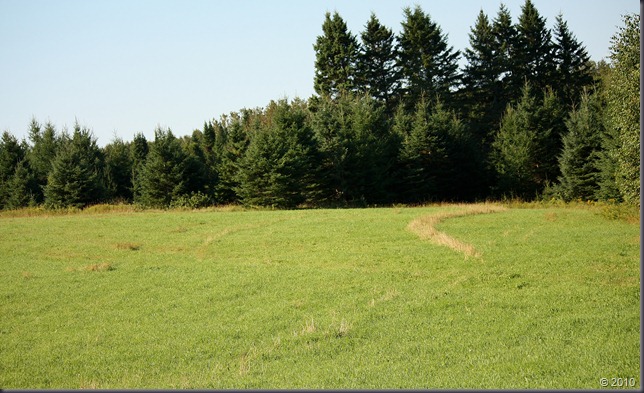 A field on the southern side of the farm.

This ground-hog is living large with little threat of infringement on his palatial surroundings. 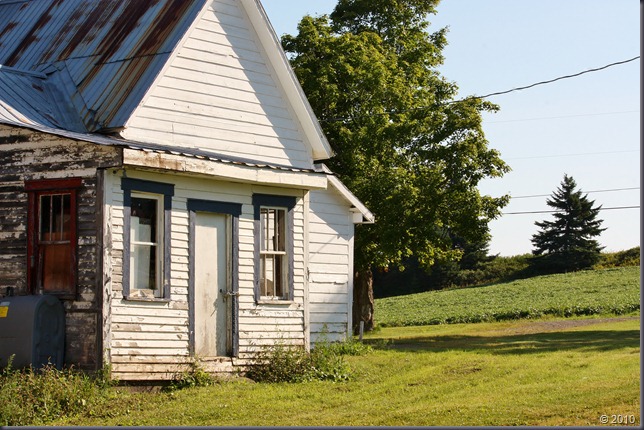 Standing out to the side of the old shed, I am looking at the door leading to the “summer kitchen”. The clothes line used to run from here.

Looking past the corner of the house, towards the north. That’s my uncle’s farm on the hill, to the left. 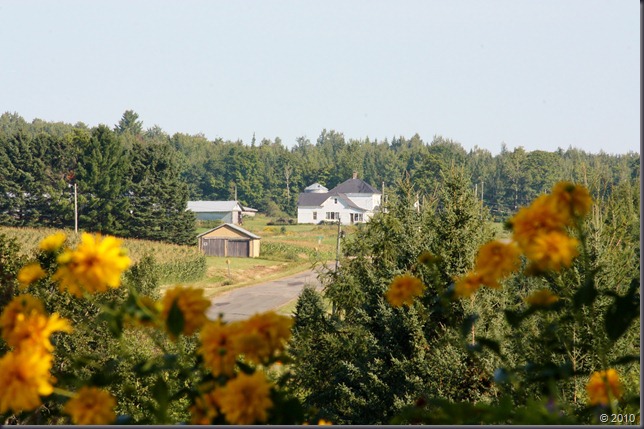 Looking at my uncle’s farm, nearly 3/4 of a mile away, through my zoom lens.

Looking at the homestead from the spot on the road where I used to hit rocks with a wood baseball bat, and see how far I could hit them. 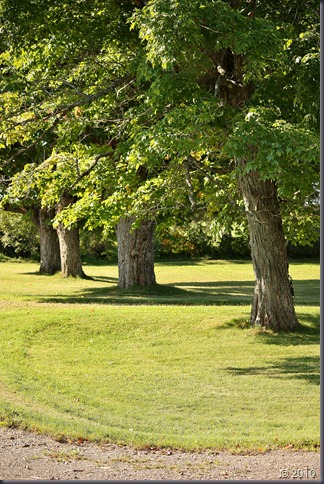 The front of the yard. The trees are bigger now. The distant trees used to support a swing we all loved. 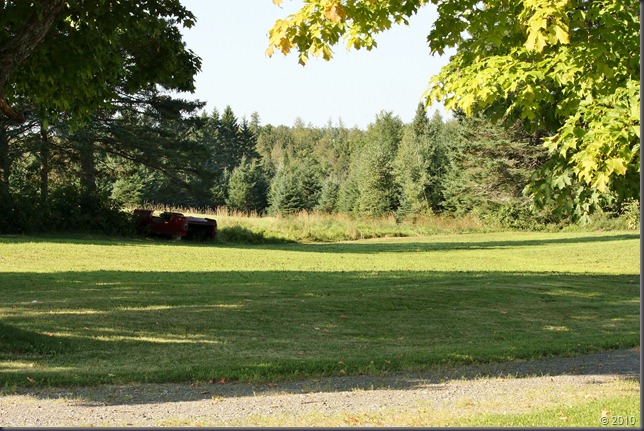 Looking south and west from the front yard. Those pines were tiny not too long ago and there was a fence line with cows milling about. My family will correct me, but I am pretty sure there was a big lilac bush over here somewhere too.

It doesn’t look like much, but that door opens to one of the warmest parts of my heart. 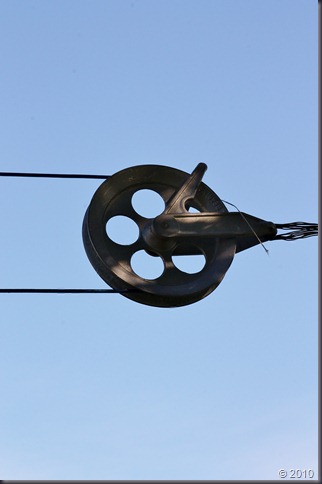 From a time long ago, everyone should have learned to use one of these at some point.

For this picture, I stood on a spot in the front yard where, one Christmas season we got a snow storm so heavy that you would have barely been able to see the house through the blizzard.

The barn. This side faces north, and was part of the view from the north bedroom. I still get cold thinking about that room. 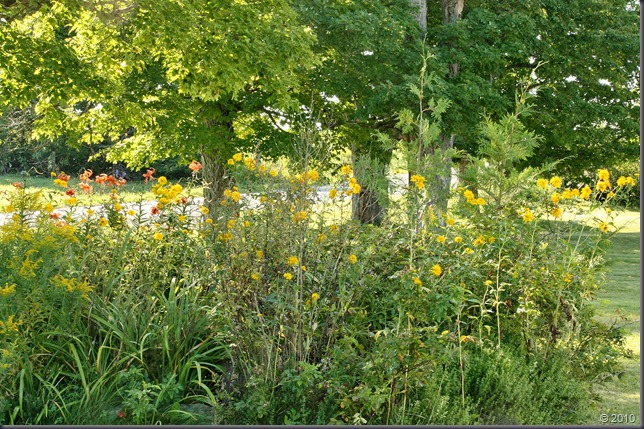 This was always a pretty spot in the front yard. Although there may still be a lost baseball or two in there.

This entry was posted in Best Of, Family, Photography and tagged acres, as it should be, Beal, Canada, Dirt road, Farm, fields, homestead, live off the land, nature, New Brunswick, outdoors, presque isle stream, the land, vacation. Bookmark the permalink.