I just brought our 9 foot Frasier Fir Christmas tree into the house this evening. I think it’s a beautiful tree, and once it falls, I think it will even look better. I can tell you it smells tremendous. Fir trees have to be one of the best smells I ever encounter. My daughter Jacqueline is really happy that we got to bring this tree home and better yet, we even put it in the house. She was so pleased she wanted to get a quick picture with the tree. If you can see the look on her face, she didn’t stick around for a second picture, but she did try to give the tree a hug already.

Anyways, go see Ken Goduti at The Renewable Trading Company, 3 Rockingham Road, Londonderry, NH and get a great deal on a tree. Ken and his son Kevin will take great care of you and you will love your tree this year too. 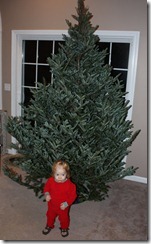 Joy in the simple things

Most mornings at our house consist of the twins and I hanging out in the family room. There are plenty of toys to play with, books to read through, snacks nearby for dad to prepare, and music, TV, or DVD’s for entertaining and learning. Just this week one of the channels on DirecTV has started playing Christmas music full-time. So the other day, I just put the Christmas music on, nothing to watch, and wondered how the twins would do. After Theodore and Jacqueline took turns pointing and mumbling a few commands my way, to turn on a show, they settled in to play. The music played quietly in the background. Once in a while a faster paced tune would catch their attention enough to warrant a little shake of the hips, or a couple of pumps up and down with their arms. Mostly they played.

They interacted quietly together for almost two hours. I watched them and talked to them. I jumped in and gave them some fruit and vegetables mixed with rice cereal. As is their custom now, they take turns securing bites from dads spoon. Often times one or the other will lose interest in the snack for a moment. This, of course, prompts the other one to grab their twins’ hand and lead them to dad for another bite to eat. It’s pretty funny and almost always works. Before too long they have devoured another 6 ounces of fruits or vegetables, or both, mixed with cereal.

I don’t know if this method of feeding would be recommended anywhere but it certainly works. They have eaten so many more vegetables since the competition of “who’s turn is it” has been implemented. Just like the thought process that was the theme of my A Time Not So Long Ago post, I know for a fact that my mom and dad did what they had to in raising us. Whether the approach was recommended, popular, or not, didn’t matter. I wouldn’t have it any other way. Jacqueline cannot resist the opportunity to step in for another bite, especially if I have just announced that it is Theodore’s turn. It’s funny but it works. She will also freely lead him in for another bite when he has been distracted by a sound in another room (our cat), or a plane flying overhead, or the site of a leaf blowing past the window, or because he spotted a bird or squirrel outside the window. He is easily distracted by his powers of observation. I wonder where he gets that as I sweep a look across the horizon through any of the eight windows I see from my perch. 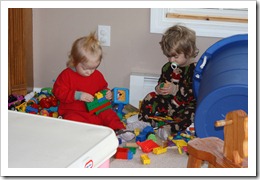 Jacqueline and Theodore play with Lego's on the family room floor.

This particular morning though, the twins sat (as pictured) over by the window at the end of the house, and worked with blocks. Actually they were playing with Lego bricks. Instead of throwing them or fumbling with them, they put them together with relative ease. This is progress. Not too long ago they had a hard time figuring out how to put more than three or four of them together. Jacqueline hurries to pick up the bricks and put them together while Theodore must inspect each brick for it’s structural integrity and stackability (I made up the word). I loved just watching them as they got lost in their little world of figuring things out. Priceless.

As I write and think on these things I am reminded of the simple things in life that bring so much joy. Imagine in the mind of a child the excitement and wonder of virtually everything as they learn new things every day. Is it any wonder that we, as adults, take such pleasure and sheer joy from watching children? When along the way did we, as adults now, lose that wonderment and excitement of most everything? Maybe this should be a topic for another time. As for this week, I am thankful for the time I get to experience pure joy in the simple things.