A couple shots of the twins

I thought I would throw a couple of pictures of the twins in here today.

Theodore loves to swing at Grammy’s. If he could take his naps in the swing he probably would. Taken with my $0.99 phone.

Jacqueline loves to walk around the yard at Grammy’s house. It’s especially rewarding as she generally holds on to a an adults’ index finger and narrates in her own words everything she sees. Also taken with my phone.

Jacqueline out for a walk in Grammy's yard

Theodore sits down on his horse, at the table, to play with some Lego blocks. Ahhh! Some time to himself. 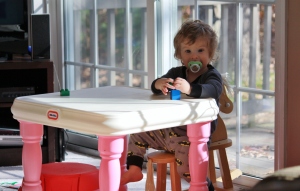 Theodore enjoying a moment to himself. Of course all of his moments to himself are short-lived as his twin sister, when awake, is never far from his side.

This table generally gets more use up-side-down, but for this moment the twins are content to have it standing on its four legs. Just pull up a horse and an over-turned bucket and have a seat.

Theodore and Jacqueline share some table time. They have chosen interesting seats. A rocking horse and a play bucket.

You will notice that Jacqueline has slowly moved off her seat and closer to the strike zone. She will inch ever closer in an attempt to ‘borrow’ those blocks. On this occasion Theodore (increasingly wise to these scenarios) gets up and gets away before the pilfer is complete.

Theodore is always working with something. Jacqueline looks interested but only because she is plotting to 'borrow' anything Theodore plays with. Until dad steps in, at which time she returns the item to Theodore and claps her hands in honor of her own achievement.

I didn’t get the exit on camera as Theodore got up and walked towards me. Jacqueline, who was left in the dust, was content just to take a seat on the horse.

Theodore has a foot on the floor in case he needs to exit quickly. Jacqueline eases herself closer to those interesting blocks he is holding.

These two always have something working. I wish I could take a picture of every moment. There are hundreds of precious moments every week. Fortunately, for now anyways, they miss each other when the other is not there more than they are annoyed with each other when they are there.

Looking ahead to tomorrow I will have a Veteran’s Day themed post. I have thought on this often over the years, and I hope you will enjoy it. I have always liked the Veteran’s Day holiday since I was a kid, primarily because I don’t want those folks ever to be forgotten. We take so many things for granted, our military certainly should not be one of those things.

Thanksgiving is just two weeks from today! It’s hard to believe it’s that time of the year again. 6.5 weeks to Christmas, 7.5 weeks to the New Year. It flies by! I really do enjoy the weeks starting with Thanksgiving and running through New Year’s Day. I guess it’s because I had so much time with family over those weeks while growing up. I certainly have a lot of memories surrounding that time frame. I am sure I will be sharing some memories of the Holidays with you all over the next several weeks. My favorite time of the year.

I leave you with a question. Which of these is your favorite Holiday?