Visit from the red fox

Early this morning I was sitting on the couch holding Jacqueline, who was wrapped in a blanket, and enjoying the cuddle time with dad, when I noticed some movement outside the window. I looked closer and saw a beautiful red fox out behind the back yard. We don’t have much of a yard really, it’s more of a space between the house and where the woods end. Anyway, I didn’t have access to my camera unfortunately, otherwise I would have added some photos.

Fox on the hunt

For around five minutes I watched this fox dart in and out of view, while it played with its prey. The fox would go up over some rocks and an embankment that climbs towards the woods. Then I would see the big bushy tail appear again and the fox would pounce on its prey. It looked like a chipmunk was the prey in this case and this fox was having some fun at the little guy’s expense. The fox flipped the chipmunk into the air with a flip of its head several different times. When the chipmunk would land, this fox would take its signature leap, straight up, with its back arched, and aim its nose like a harpoon at its prey. The fox repeated this maneuver numerous times from various angles. In total, the choreography was quite impressive and it appeared from my window seat that this fox was having an enjoyable morning.

The fox makes sure I get no closer

All at once the fox seemed bored, lost interest, and meandered away like nothing at all had even happened. And when I say meandered, I mean this fox took a route similar to that of Rafael Nadal when winning a long rally. I know, I know, but  I am sure I am not the first person to put Nadal and fox in the same paragraph. Anyways, back to the hunt outside my window, somewhere out there, the chipmunk was still there. The fox, led by its nose, made its way up over a hill, back towards the den. I have seen this den, it’s huge! I am certain a black bear could get into this den if it so chose.

The fox follows its nose

Then twenty minutes later the fox suddenly appeared. It made a straight line dash across the back yard. Near the place where the fox had danced, as only foxes can do, the fox walked over, scooped up the chipmunk in its mouth and took off. End of visit. 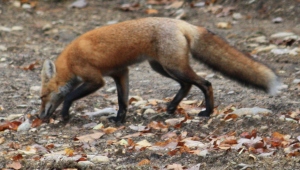 I left a chipmunk around here somewhere

Then, I kid you not, as I was typing the words ‘took off’ in that last paragraph, the fox appeared out back, again. So unbeknownst to you all, I stopped typing and grabbed my camera. This time I got some shots, and once I look through them I am hoping to have a couple worth adding here.

Seriously, I am trying to hunt here

Anyway, the fox only stayed for a minute or two this time. I got a better look and I could really noticed how heavy the coat of fur on this fox is. It’s getting to be that time of the year I guess. This fox is out hunting today, for sure. Maybe I will get to see this beautiful animal again today. It’s always nice to see a visit from the red fox.

I am getting a scent in this direction